Open Forum on Youth and ICT 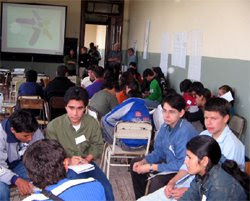 Past October 8 was held in Corrientes’ Province an Open Forum on ICTs and Youth, leaded by TakingITGlobal, in partnership with Fundación Centro Integral de Apoyo Educativo –CIAE- a local partner of our WSIS National Youth Campaign in Argentina, gathering 100 young people from 5 provinces of the Northeast of Argentina.

During four hours, young participants discussed in small groups issues such as Information Rights, Press’ Freedom; the social impacts of the ICTs in education and employment; the opportunities that Internet offers to make possible an “alternative communication”; the concept of “Information Society” in the country’s context, and the social/digital divide and their perspectives to 2020.

- “Argentina is a country with high levels of poverty and hunger. Mostly of the population is disconnected and living like in the 19 Century and at the same time some privileged cities like Buenos Aires are saturated of Internet Cafes and living the 21 Century”.

- "ICTs have both negative and positive impacts on employment. ICTs are destroying some areas of employment and at the same time are creating new ones. ICTs are not the problem but the absense of politics of adaptation to the change that ICTs are generating. During 90’s changes were implemented without mechanism of re-adaption and re-inclusion for people who was being excluded of the labor market. The current high rates of youth unemployment are related to the high level of education, ICTs abilities and experience required by the market, but at the same time, the available employments are underpayed and overqualified".

- "Many times the problem is not about ICTs’ access but ICTs awareness. There is a lack of attitude towards ICTs, being responsible of that the current educative system".

- "The current context of Argentina is very negative: “We can’t say that Argentina is part of the Information Society”. There are a lot of cities and towns isolated where there is not enough infrastructures and many times there is not electricity access. The near future depends of the strenghtening of the social/economic situation, the politic will, the reform of the educative system and the implementation of programs oriented to tackle the current social/digital divide".

- "Regarding to possibilities of internet to communicate in an alternative way to the big media companies, it is clear. Young people and NGOs has new ways to communicate what they are doing in the communities without be dependent of mass media. Blogs, e-communities and emails are great tools to spread the word about activities, social issues, ideas and social success. In the other hand, we shouldn’t forget that in small communities, local/community media such as newspapers and mainly radio stations are a great way to inform people at community level".
Publicado por Damián Profeta el 25.10.05